In February 1982, the U.S. Department of Commerce joined forces with the Institute of Supply Management (ISM) to develop a new economic indicator called the Purchasing Managers’ Index, or PMI®.

The index is based on monthly survey data compiled from purchasing and supply executives nationwide. The monthly survey questions some 400 firms regarding the status of 10 individual components of the health of their business. The 10 components are:  new orders, backlog of orders, new export orders, imports, production, supplier deliveries, inventories, customers' inventories, employment and prices.

The survey reflects the change, if any, in the current month compared to the previous month of each component. The original PMI® calculated the health of the U.S. manufacturing industry by combining four components of the ISM’s monthly survey of businesses. The four components were:  new orders, production, employment, and supplier deliveries.  The current PMI® adds a fifth component:  inventories.

The table below shows the most recent survey results. 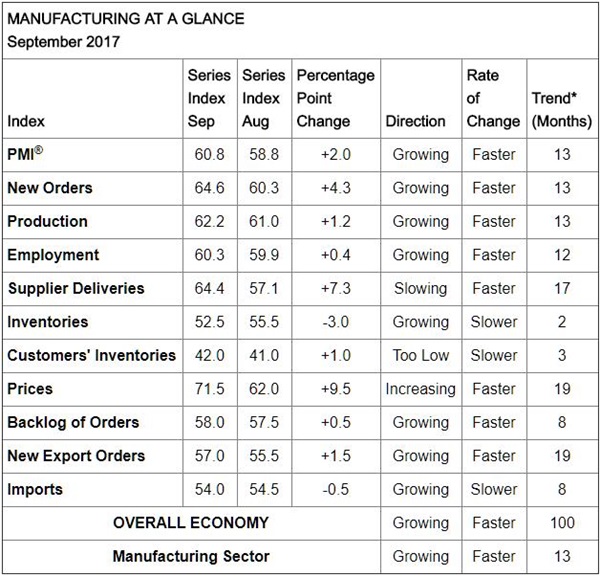 Notice the current PMI® stands at 60.8 percent, well above the 43.3 percent mark which indicates an expanding economy. GDP growth rate results for 2017 have been mixed with first quarter growth of a meager 1.2%, followed by a more robust 3.1% in the second quarter. Forecasts for the third quarter are all over the map, as analysts struggle to gauge the impact of the hurricanes that have pummeled the nation. But if the PMI® does in fact closely parallel the nation’s GDP, our upcoming economic growth looks promising.