Welcome to the weekly edition of The Ag Globe Trotter by Dr. Dave Kohl.

The impact of inflation really caught my attention during a recent road trip to a speaking event. A quick stop at the local Jersey Mike's sub shop in Cedar Rapids, Iowa, reinforced the old term ‘sticker shock.’ After ordering a medium-sized roast beef sub, a bag of chips, a brownie and a Diet Pepsi, paying with a $20 bill resulted in very little change. My discussion with the young people working there found that supply issues and labor shortages had increased the cost of this meal by nearly 100% in the past year. Of course, this story is being experienced by almost everyone in the U.S. and around the globe. In this research paper, we will discuss the historical perspectives on inflation. The focus will be on the current contributors to elevated prices and the implications to owners and managers in the agriculture industry.

Episodes of inflation
The graphic below illustrates a historical view of inflation, measured by the Consumer Price Index (CPI). During World War II, a shortage of goods due to the war effort resulted in inflation at its highest at 20% annually. After a post-war period of deflation, inflation quickly appeared again during the Korean War at 10%. The post-war baby boom through the late 1960s found inflation very tame at less than 5%. Then, inflation peaked three times starting with the buildup of the Vietnam War in the late 1960s and compounded by oil and energy shocks in the 1970s. Inflation was nearly 15% in the late 1970s before declining below 5% in the early 1980s.

The contributors to inflation in the 1970s were not only the war effect, but demographics. Baby boomers in their early and mid-20s were actively buying consumer products that were being mass-produced such as automobiles, houses and appliances. The ‘pig in the python’ or bulge in this population demographic resulted in too much money, fueled by the Federal Reserve’s accommodative action, chasing too few goods, which resulted in inflation. The theme in this era was behavioral economics. The buying frenzy was fueled by the mindset, “Buy now, before the price goes up.” 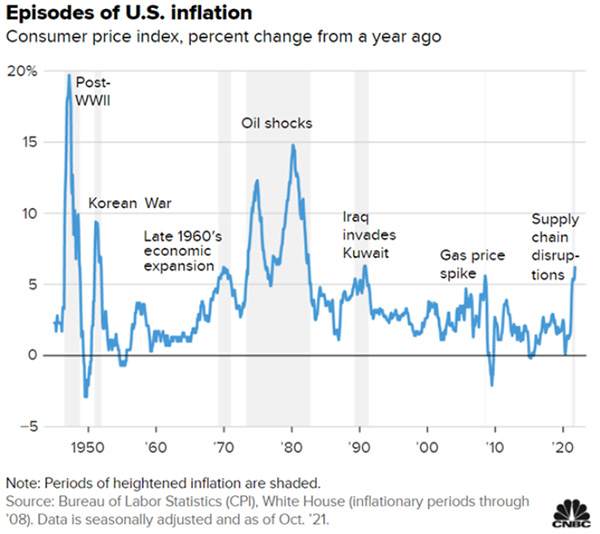 The appointment of Paul Volcker as the Federal Reserve Chairman in the late 1970s with the directive to raise interest rates to subdue the dragon of inflation set the stage for inflation under 5%. Two recessions in the early 1980s resulted in dampening inflation expectations. This led to the longest economic expansion at that time and a bull stock market in the 1980s.
The chart above also illustrates inflation surges in the early 1990s as a result of conflicts in the Middle East and uncertainty regarding fuel prices. The remarkable fact is that since that period until the beginning of the COVID-19 pandemic, inflation was very tame at less than 5% except for the period of run-up before the Great Recession beginning in 2009.
Fast-forward to the 2020s and inflation started in earnest one year after the pandemic. The double barrel shot of accommodative monetary policy in the U.S. and abroad, along with generous stimulus checks set the stage for this bout of inflation.
Regardless of how it’s measured, the ‘heat is on’ in terms of inflation. For example, core inflation, stripping out food and energy prices, has jumped from 1.3% to 6.4% in one year. Headline inflation, which includes food and energy prices, increased from 1.4% to 7.9%. Most notably, the Producer Price Index (PPI) has increased from 1.7% to 10%. To put a global perspective on inflation, the effective inflation rate in Argentina is 45%  and in Turkey, it’s over 50%.
The contributors to inflation are numerous. Fiscal policy, in the form of stimulus checks, and accommodative monetary policy have been the major contributors. However, supply and marketing chain issues, labor shortages as a result of the stimulus checks, extended unemployment benefits, and issues pertaining to the lockdown, such as limited child and elder care, have all skyrocketed inflationary pressures. Of course, the disinvestment in fossil fuels and more emphasis on green energy has resulted in supply and demand imbalances and distribution issues. Issues in the energy sector are being accentuated and compounded by the conflict in Ukraine.
Watch list for inflation duration
One of the major questions across the spectrum of decision-makers in agriculture business and households is, “What is the extent and duration of this bout of inflation?” In the short term, there will be many contributing factors.
Whether it’s technology, manufacturing or agricultural products, issues with supply and marketing chains will be a major variable to consider. For example, almost 75% of computer chip components are produced in China. Factors including weather, the lockdown of workers, trade and tariff issues, and geopolitical military posturing will create uncertainty in this area. Domestically, trucking shortages due to regulations, the retirement of the trucking workforce, and port issues will continue to present challenges over the next couple of years. Labor contracts have been renegotiated with increased rates, which will keep labor costs higher as well. The supply, demand and distribution of fossil fuels will also present conditions for inflation.
While the central banks in the U.S. and globally will attempt to dampen inflation with tapering of bond purchases and increases in interest rates, this may not be as effective as it has been during previous economic cycles. This is because the aforementioned factors contributing to inflation are more than just accommodative central bank action.
Similar to the 1970s?
One question I often is, “Will inflation be similar to the double-digit levels experienced in the 1970s era?” One only needs to examine the durable goods industry to gain some perspectives. When lumber prices reached nearly $1,800 per board foot and the price of other supplies skyrocketed, consumers and buyers put the brakes on. Currently, there’s a shift from the lockdown, which encouraged building and home renovation, to the consumption of more services, entertainment and travel. If this continues, inflation at the current level can be expected. However, any segment of society or industry can be an exception such as the run on toilet paper during the pandemic.
Longer term
One metric to observe in both the short and long run is consumer confidence. The consumer drives 70% of the U.S. economy in services and goods and 55% of the global economy. Strong consumer confidence was observed prior to the pandemic. The Index of Consumer Sentiment, measured by the University of Michigan, was above 90%, almost 95% of the time in the 128-month economic expansion leading up to the COVID-19 pandemic. Recently, this index has been in the high 50s and low 60s, which is indicative of a lack of consumer confidence. However, if this index exceeds 90, then inflation will surge as a result of the $2.5 trillion of stimulus saved by consumers and businesses.
In the longer term, dampening inflation requires automation replacing labor. As labor theory states, automation replaces mundane tasks first, then requires a higher level of talent to operate the automation and technology. Instead of labor shortages, there may be job shortages in certain areas of the economy in the future.
Finally, a large variable for long-term inflation in the 2020s is demographics. As previously discussed, baby boomers were a factor for inflation in the 1970s with the buying habits of household formation. The same segment of the population, born from 1946 to 1964, is now moving into the later stages of life. Historically, spending and investment patterns slow as individuals age and become more conservative. This demographic is not only prevalent here in the U.S. but in Europe, Japan, China and other rich nations of the world. In some of the human health articles, the age 78 is critical. At that age, mental and physical health deteriorate rapidly for those that failed to follow healthy habits during their lives. These habits include a healthy diet, exercise, purpose, water for hydration, mental stimulation, spiritual connection and daily activities. From 2024 to 2042, the baby boomer demographic may drive long-term inflation in the U.S. and globally.

The current inflationary environment requires intensity in managing financials and business decisions across the business and consumer spectrum. This will impact both economic and human behavior and mental health. Developing a strategy to balance personal and mental health on the emotional and financial roller coaster will be a top priority of financial and business education at all levels over the next few years.

Dr. Kohl is Professor Emeritus of Agricultural Finance and Small Business Management and Entrepreneurship in the Department of Agricultural and Applied Economics at Virginia Polytechnic Institute and State University. Dr. Kohl has traveled over 8 million miles throughout his professional career and has conducted more than 6,000 workshops and seminars for agricultural groups such as bankers, Farm Credit, FSA and regulators, as well as producer and agribusiness groups. He has published four books and over 1,300 articles on financial and business-related topics in journals, extension and other popular publications.
© Northwest Farm Credit Services 2022