Co-authors Ing Cynthia Wu and Fan Dora Xia (Wu-Xia), in a groundbreaking academic article, “Measuring the Macroeconomic Impact of Monetary Policy at the Zero Lower Bound”, published in the Journal of Money, Credit and Banking, Vol. 48, No. 2-3 (March-April 2016), argue that the federal funds rate, the major monetary policy instrument of the Federal Reserve, might not be what it seems.

Wu-Xia note that since December 2008, the federal funds rate has been near zero. When zero rates proved to be insufficient to eliminate the negative effects of the Great Recession, the Fed introduced new recession-fighting tools. The centerpiece of this new strategy was the large-scale asset purchase program commonly known as Quantitative Easing (QE). Wu-Xia claim that the impact of these new measures has made it difficult to determine what the exact overall stance of monetary policy is at any given moment in time.

To better understand the true stance of monetary policy, Wu-Xia developed the “Shadow Fed Funds Rate” concept. Roughly, this new mathematically determined rate takes into account both the actual federal funds rate and the impact of QE, and other non-traditional policy tools to determine a more accurate measure of the Fed’s impact on the economy. 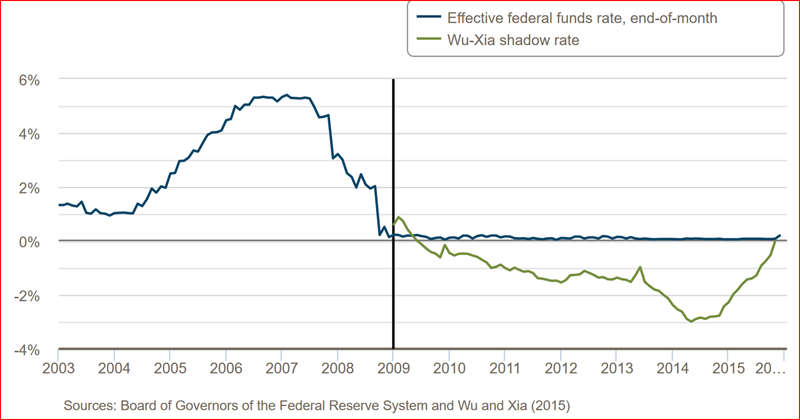 Minutes from the March 2017 FOMC meeting indicate the Fed is considering reducing the size of its balance sheet in the near future:  “… policymakers discussed the likely level of the federal funds rate when a change in the Committee’s reinvestment policy would be appropriate. Provided that the economy continued to perform about as expected, most participants anticipated that gradual increases in the federal funds rate would continue and judged that a change to the Committee’s reinvestment policy would likely be appropriate later this year.”

If and when the FOMC decides to reduce the size of its security holdings, most economists believe the Shadow Fed Funds Rate will soar above the actual federal funds rate, creating a much stronger tightening effect than expected.