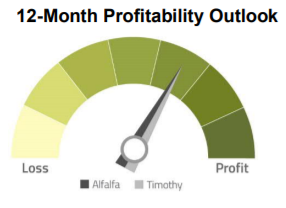 Drought is reducing hay production across the Northwest. Many areas recorded the driest May and on record. May and June are critical times for a variety of crops including grass hay, alfalfa, pasture and wheat. This comes as reduced winter snowfall is limiting irrigation supplies lower across the west.

Access to irrigation water will be a limiting factor for crops grown in irrigated areas. In Klamath Falls Oregon, the primary water canal will not be charged this year. Producers without access to canal water may use wells. Wells are not universally available and total hay production will decrease dramatically year over year. Near Ontario Oregon, the Owyhee irrigation district reduced water availability 25% from 4 acre feet per acre to 3 acre feet per acre. Hay production will continue in this area but restrictions will weigh on production potential later in the season.

Pasture conditions are poor. In the absence of pasture, cattle producers are faced with the choice of buying expensive hay or liquidating livestock. Tax laws allow producers to sell breeding stock and not pay income tax on the associated income. The rule allows producers to defer income taxes so long as the livestock are replaced within 2 years. Producers therefore have an incentive to sell breeding stock instead of buying expensive hay. This will help moderate the demand for low-quality feeder hay in the short term. Producers obligated to buy breeding stock once drought conditions abate will resume normal hay purchases in 2022 or 2023. This means cattle producers will sell a portion of their breeding herd but will have to restock over the next two years to avoid income tax consiquences Cattle producers who retain breeding stock will pay higher prices for low quality hay, narrowing the price gap between low and high quality hay.

Wheat and other cereal crop production in non-irrigated areas is so poor many are considering harvesting crops for hay instead of grain. Grain crops are not optimized for forage nutritional content or yield. Additional forage from converted grain crops will modestly add to the supply of forage.

In Washington, first cutting alfalfa and timothy is complete. Second cutting alfalfa is underway. Instances of rain did hamper first cutting but the majority of the crop is very high quality. Low-quality timothy in 3x4 big bales traded as low as $80 per ton in February. As drought conditions are realized, timothy prices increased to over $275 per ton according to the USDA. In March, premium alfalfa was trading around $170 per ton. Now, premium alfalfa is trading around $225 per ton, up 32%.

In Idaho, supply concerns are driving dairies to actively participate in the market to assure adequate inventory for the winter. First cutting yield is lower, even on irrigated fields, driven by cool dry weather most of the spring. Exporters in Idaho face a structural disadvantage as shipping rates increase. Higher fuel prices and shipping disruptions make getting hay to the ports more expensive. Alfalfa prices are higher year over year on all grades, up 30%. Supreme quality is trading as high as $245 per ton, premium quality is trading around $220 per ton. Lower quality grades are selling between $190 and $210 per ton. Export timothy is trading around $250 per ton.

In Montana, alfalfa/grass prices increased around $50 per ton over the winter. The USDA reports few sales of low-quality hay because supplies are limited. High quality hay is likewise in low supply Expanding drought and cool spring weather will curtail hay production. Inventory will be lower, and prices will be higher. Cattle producers are culling cows heavily. Heavy culling will balance demand for hay with diminished production.

In the Oregon-California Klamath Basin, the governor has declared drought disaster areas in many large hay producing counties while several other counties have requested a drought declaration. Oregon was in drought earlier than most other areas of the northwest. Hay production will be limited. 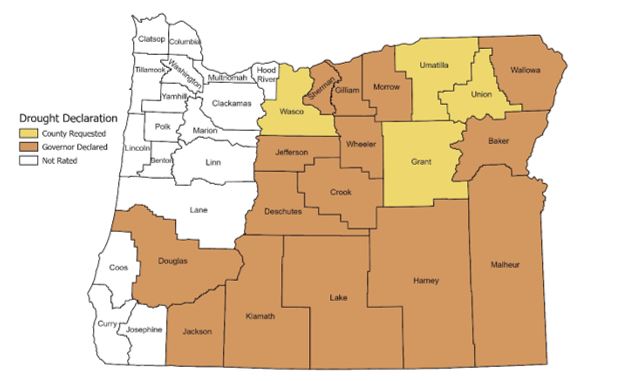 Class III milk futures are trading in a wide range between $17.00 and $20.00 per cwt. While highly variable day to day, that price range is generally profitable. Profitable prices are encouraging dairy producers to retain cows and add heifers. The northwest dairy herd has grown 9,000 head year over year. At the same time the dairy herd is growing, the cost of other feed stuffs increased significantly. In Yakima corn silage contracts are between $41 and $44 per ton, up around $10 per ton or 33% year over year. Likewise, corn silage contract prices in Idaho are higher year over year. Dairy demand for hay will remain robust. Higher feed prices across the board combined with more cows will provide tailwinds to hay prices.

Despite widespread shipping disruptions hay exports have not suffered as bad as anticipated. Alfalfa exports to China in the first four months of 2021 increased 75,000 tons, up 22% year over year. While total alfalfa shipments decreased just 1% year over year. Anecdotal reports contradict census bureau data on grass hay exports. A trade dispute between China and Australia limited Australia’s ability to export oat hay to China. To fill the demand for grass hay, China turned to Northwest timothy.

For more information or to share your thoughts and opinions, contact the Business Management Center at 866.552.9193 or bmc@northwestfcs.com.